Our research focuses on the design and development of new drugs, and pharmacological tools, aimed at the treatment and diagnosis of neurodegenerative diseases and cancer. We use modern organic synthesis methodologies, as well as innovative tools and concepts from medical chemistry research, for its later application in medicine.

Our group works in the development of new selective radiotracers for the in vivo diagnosis of taoupathies by means of positron emission tomography 18F-PET. Tauopathies are neurodegenerative diseases characterized by the accumulation of tau protein in neurons. The most popular is Alzheimer’s disease (AD), although there are other tauopathies such as Pick’s disease and progressive supranuclear palsy. At present, the diagnosis of AD can only be confirmed by postmortem analysis after autopsy. There is, therefore, the need to investigate and develop new methodologies for early diagnosis of AD, which contribute to a greater efficacy in the development of new drugs modulating the disease.

On the other hand, we are interested in the discovery of drugs that act selectively on cancer stem cells (CSC) in order to develop new therapeutic tools against breast cancer and gliomas, mainly.

The enormous intra and intertumoral variability is the main cause of therapeutic failure and highlights the absence of specific antitumor therapies for each type and subtype of cancer disease. The phenotypic and functional heterogeneity existing between the different cancers occurs not only at the tumors found in different tissues, but even among those in the same organ (intertumoral heterogeneity). The surprising scenario of tumor heterogeneity is greatly complicated by the fact that these variations also occur within the same tumor (intratumoral heterogeneity). Numerous research studies in recent years have demonstrated a clear relationship between the pathways that control the self-renewal capacity of tumor cells and the etiology of the oncologic disease itself.

Nowadays, the Cancer Stem Cells (CSC) model is the main model to explain how tumors originate, maintain and expand, as well as their mechanisms to evade the treatments giving rise to relapses or metastasis. This model postulates that only a cellular subpopulation, with the characteristics of self-renewal and differentiation attributed to stem cells, would be able to generate and maintain the tumor.

The presence of CSC in most major cancers appears to be one of the main causes of the failure of current cancer therapies both in terms of prevention of tumor progression and in the occurrence of relapses. Therefore, the elimination of this cell subpopulation by the use of drugs that act selectively and effectively on it is an essential step to obtain an effective cure.

Additionally, numerous research studies have demonstrated the existence of a clear relationship between the various transcription factors that activate tissue hypoxia and the pathways that control the self-renewal capacity of cells, thus suggesting an essential role of Hypoxia Inducible Factor (HIF) in oncogenesis through the generation or expansion of CSCs. Therefore, the biology of HIF proteins has evolved in the last decade from their role in tumor angiogenesis to the etiology of oncologic disease itself.

The strategy of our research group focuses on the synthesis of non-toxic compounds that inhibit the activity of HIF and SOX-2 interfering with the formation of oncospheres, tumor cells that under culture conditions lose adhesion forming three-dimensional spheres which are admitted as CSCs capable of initiating tumors in animal models of cancer disease. The transcription factor SOX-2, regulated by HIF2α, is an embryonic marker that is associated to the most undifferentiated forms of breast cancer and gliomas, being in turn the functional responsible of the formation of oncospheres in cultures of tumor cell lines in vitro.

New selective drugs against cancer stem cells. A new approach for the treatment of cancer.

This project is carried out in collaboration with Dr. José María Sánchez-Puelles, Scientific Researcher, of the Center for Biological Research of the Spanish Research Council (CSIC-CIB). (https://www.cib.csic.es/es/departamentos/medicina-celular-y-molecular/farmacologia-molecular) 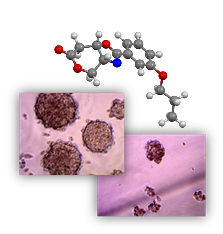