Our group is interested in the design of new drugs active against kinetoplastid (Trypanosoma brucei, Trypanosoma cruzi, and Leishmania) and malaria parasites (Plasmodium spp.). Historically, cationic compounds have been a great source of antiparasitic drugs. Since the first report by Ehrlich of the antimalarial action of methylene blue more than 100 years ago (1891), several dicationic drugs were discovered some of which are still used nowadays in the clinic for human and veterinary infections. The diamidines pentamidine and diminazene for instance are currently first line drugs for the treatment of early stage gambiense sleeping sickness and animal trypanosomiasis (Nagana), respectively (Fig. 1).

In the last years we have discovered several families of dicationic compounds, bis(2-aminoimidazolinium) and bisguanidinium salts, that act potently in vitro and in vivo against the protozoan parasites T. brucei and P. falciparum (Dardonville & Nué-Martínez, Curr. Med. Chem. 2017, 24, 1-28). Several compounds are 100% curative in mouse models of stage 1 sleeping sickness or able to reduce the parasite load in murine models of malaria. Our efforts are directed towards the improvement of these leads (e.g. prodrug approach) and the discovery of new compounds active against late-stage sleeping sickness. As this class of dicationic compounds has been shown to interact specifically with the minor groove of DNA, we are also interested in studying their interaction with DNA as potential biological target. Biophysical studies using thermal melting, surface plasmon resonance (SPR), and X-ray crystallography have shown that these compounds bind to DNA minor groove at AT-sites (Fig. 2: «In and Out the minor groove: Interaction of an AT-rich DNA with the CD27 drug» Acosta-Reyes et al. Acta Cryst. 2014, D70, 1614-1621). 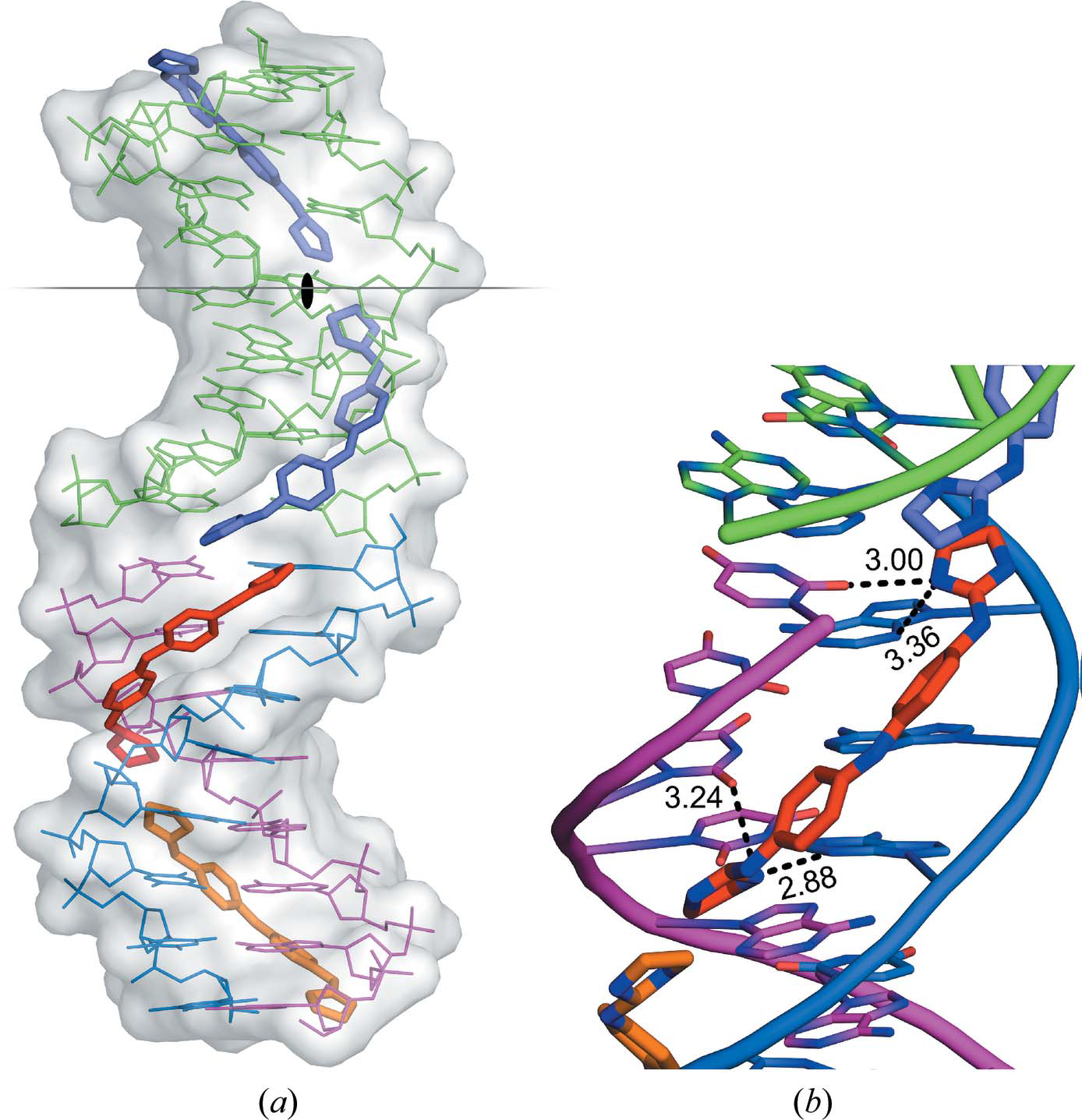 Figure 2: Crystal structure of the complex of the DNA duplex d(AAAATTTT)2 with the dicationic drug 4,4-bis(imidazolinylamino)diphenylamine (CD27) (a) View of the different crystallographic units of the complex. The black lozenge indicates one of the dyad axes. There are three independent oligonucleotide chains. (b) Hydrogen bonds formed by one CD27 drug with minor-groove atoms of the DNA duplex. N atoms of the drug are shown in dark blue (Acta Cryst. 2014, D70, 1614-1621).

We have shown recently that the N-phenylbenzamide bis(2-aminoimidazolinium) compounds are powerful trypanocides that disrupt DNA-protein interactions and cause disintegration of the Trypanosoma brucei kinetoplast (Millan et al. Nucleic Acids Res. 2017, 45, 8378-8391).

Mitochondria are of crucial importance to survival of protozoan parasites. Because trypanosomatid parasites have a single mitochondrion (in contrast to mammalian cells possessing multiple mitonchondria per cell) it is considered a key target for chemotherapy. Several targets in trypanosomatid mitochondria have been described (e.g. electron transport chain, kDNA, etc.) which should allow the rational design of new mitochondria-targeted antiprotozoal agents. Triphenylphosphonium molecules are lipophilic cations with a charge that is delocalized over a large and hydrophobic surface area. Thus, they can cross easily lipid bilayers by non-carrier mediated transport. Since plasma and mitochondrial transmembrane potentials are negative, lipophilic cations are electrophoretically driven through these membranes and accumulate specifically into mitonchondria (Fig. 3).

Figure 3: example of electrophoretically driven accumulation of bisphosphonium salts within the parasite’s mitochondrion.

Earlier results by our group have shown that diphenyl phosphonium and bisphosphonium derivatives are potent antitrypanosomal and antileishmanial agents in vitro. As expected for this type of lipophilic dications, they interfere with the mitochondrion of the parasites to produce their antiparasitic effect. Benzophenone-derived bisphosphonium salts of this class were shown to exhibit leishmanicidal activity through inhibition of respiratory complex II (Luque-Ortega et al. J. Med. Chem. 2010, 53, 1788-1798). In T. brucei, this class of bisphosphonium compounds do not act principally on succinate dehydrogenase but on the mitochondrial F0F1 ATPase (Taladriz et al. J. Med. Chem. 2012, 55, 2606-2622; Alkhaldi et al. Int. J. Parasitol. Drug Drug Resist. 2016, 6, 23–34).

The trypanosome alternative oxidase (TAO) is a critical enzyme for the respiration of the human infective form of the parasite T. brucei (Ebiloma et al. Med. Res. Rev. 2019, 39, 1553-1602). We are currently working on new strategies to exploit the potential of lipophilic cations to deliver specific inhibitors of parasite’s respiration to its mitochondrial target (Fig. 4). This led to the discovery of very potent TAO inhibitors that are active against wild-type and drug-resistant strains of T. brucei and T. congolense (Ebiloma et al. Eur. J. Med. Chem. 2018, 150, 385-402). 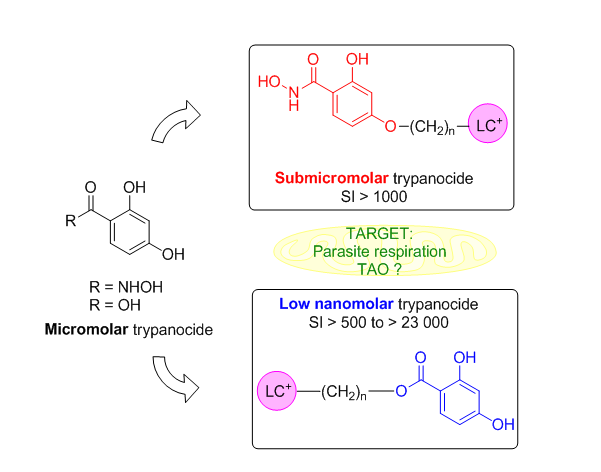 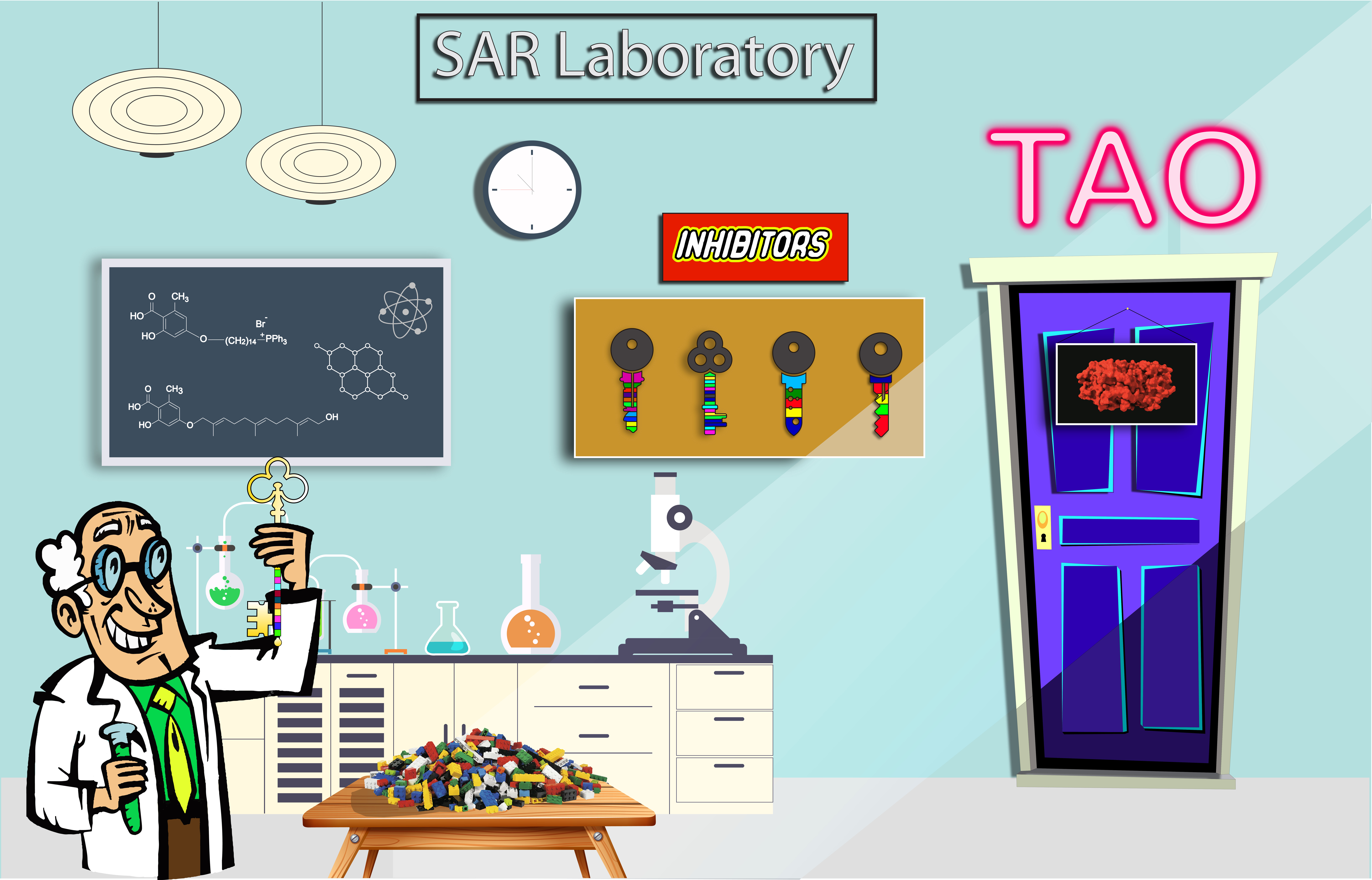 Ionization constants are physicochemical parameters that govern the fate of ionizable drugs in the body. Administration, distribution, metabolism and excretion of drugs as well as binding to their target are deeply influenced by their ionization state, that is, by their acidity constant (pKa). Measuring pKas experimentally is an essential but time-consuming task in a drug discovery program. We have developed a methodology that allows for the rapid measurement of pKas of series of compounds by UV–spectrophotometry. This protocol which is straightforward to set up takes advantage of the sensitivity of UV–spectroscopy and the throughput enabled by the 96-wells microplate (as opposed to the use of 1 cm quartz cuvette). The compounds, in stock solutions in DMSO, are dissolved in several aqueous buffer solutions directly in the microtitre plate allowing the simultaneous determination of the UV-spectra as a function of pH. Further treatment of the data provides the pKa values in a medium-throughput manner.